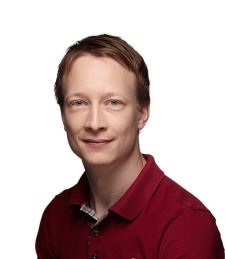 An interpreter written in OCaml can be about one-third faster if the evaluation function is partially applied so it runs in two stages – first pattern-match on the expression constructors and then perform the computation.

Using the functional programming language OCaml, we’ve recently implemented a domain-specific language for specifying analyses of website traffic. This involved the classic computer-science task of parsing an abstract syntax tree (AST) from a text file and evaluating that AST in varying environments. The AST will be parsed once and evaluated in millions of different environments.

Performance is good, but we wanted to understand if we could easily make it better. To investigate this without being distracted by the details of our particular domain-specific language, we boiled it down to the problem of interpreting the following toy language of expressions with one free variable.

The VarX constructor corresponds to the one free variable x. For example, the expression 1 + x is represented as Binop (Add, Const 1, VarX). A more realistic language would of course support multiple variables.

The standard way to interpret this language is through a function eval: expr -> int -> int, where eval e x evaluates the expression e in the environment x, meaning that the one free variable has value x. Since we’ll be interpreting random expressions in random environments, we define a toy division operator that doesn’t raise exceptions when dividing by zero.

No computation happens in the partial application let f = eval e, so if we invoke f x and f y then both invocations result in the AST being pattern-matched. Alternatively, we can define the function partial with the same type signature as eval but different performance characteristics – pattern-matching on e happens at the partial application let f = partial e, and subsequent invocations of f x and f y do not inspect the AST.

To asses the performance of each approach, we’ve created a benchmark that evaluates the following randomly-generated expression with values of x from 0 to 9,999.

We benchmarked the eval and partial approaches and two other variations:

From these timings, we conclude the following:

Apart from performance, there are several differences between eval and partial worth discussing:

The complete benchmark code is available on GitHub.

With an execution time of 1.25 ms per 10,000 iterations, each iteration takes only 125 nanoseconds, which is fast enough to be sensitive to tiny changes in compilation strategy and calling convention. In particular, compiling with -inline values greater than 27 brings the execution time of “compiled” down from 1.25 ms to 825 us. Therefore, take these results with a grain of salt and benchmark your own code in your own environment.